In today’s article, I am going to tell you all that “When does the admission take place?” i.e. in relation to any land When does the change in possession of the said land take place?, 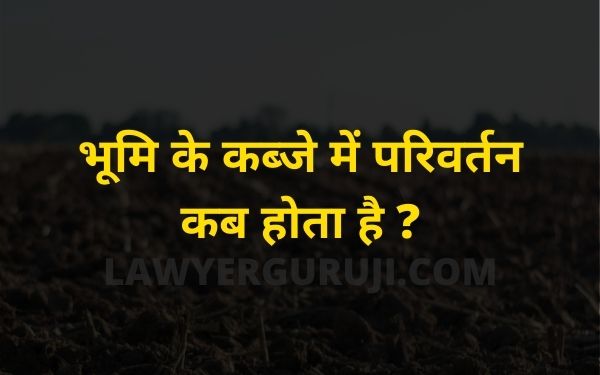 A simple meaning of the filing of Khatauni is that after rejecting the name of a person in the document related to the land, the name of the person who purchased that land is to be filed in Khatauni.

Understand these two in detail.

1. When is the filing rejected / when is there a change in the possession of the land?

After the order on the application, the certified copy has to be presented before the lawmen, he writes the name of the occupier under the order in the transfer register number 10 and orders the lekhpal to write the name under the said order in Khatauni.

It is necessary to get the name in the land document i.e. Khatauni, from which it becomes clear who is the present owner of his land.

Example:- A father had four sons, now these four sons were the heirs of this father’s property. If the father dies due to any reason, age, illness or sudden death, then the property of the four sons will be equal to that of the four sons, because all four of them are heirs. Now to get the possession of the land in relation to the land by all four, the process of dismissal will have to be adopted. After that the names of the four brothers are included in Khatauni.

If a person acquires possession of any land by transfer, then the owner of that land is the person to whom the land is transferred.

It is very important to get the name mentioned in the land document Khatauni. In such a situation, the recipient of possession has to apply to the tehsil of that area for rejection. After the order is made on the said application, the name gets added to the Khatauni. For him, a certified copy of the order has to be presented before the lawmen, he writes the name of the occupier in the transfer register number 10. Kanungo orders the lekhpal to write his name in Khatauni as per the order.

2. Who applies for the dismissal of the filing?

The application for dismissal is made by the person who is in possession of the land by succession or transfer. Application for rejection of filing will be made in the tehsil of the area where the said land is situated.

At the time of filing the application for dismissal, all the documents related to the land have to be attached.